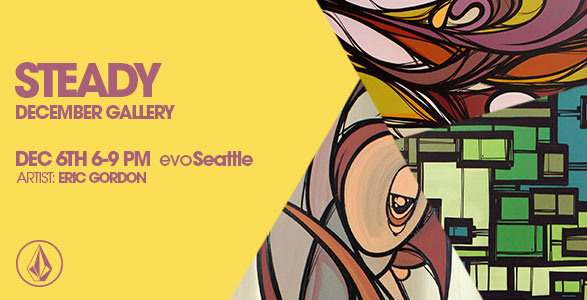 Come meet Volcom’s Eric Gordon in the evo store, then skate for FREE from 7pm to 9pm. THANKS VOLCOM!

Check out what our friends at evo have in-store for the night:

In addition to Eric’s work being available for sale, evo has a limited number of free prints, drinks, a FREE SKATE Session at All Together Skatepark downstairs (7 pm to 9 pm), Seattle’s only indoor skatepark, all brought to you by our friends at Volcom. We’ll also be offering 20% off all Volcom streetwear and 10% all skate.

After painting a mural on evo’s South Wall back in April 2013, Eric returns to Seattle bringing a unique combination of styles in the form of latex acrylic and spray paint topped with heavy black enamel on wood panels.  A geometric installation of wood sculpture and collage will add dimension to his series of stacked boxes, fluid designs and entwined bird themed paintings.  A dedicated craftsman, Eric has been with the Volcom family for almost four years, creating murals, graphic designs and custom furniture along the way. evo is extremely proud to be a part of Eric’s first solo exhibit entitled “Steady”, a nod to his perseverance and patience as a working artist.

Growing up in southern California, Eric Gordon was drawn to surf and skate culture by the t-shirt graphics and sticker designs he saw plastered on boards and signs near the beach. After being given his first set of markers by his Grandpa Jack he immediately began to mimic those sticker designs in notebooks and on construction paper. Later, he discovered the bright colors and free flowing style of graffiti, which led to his first experimental paintings under a bridge by his house.

After a life-changing tour of Europe in 2002, Eric began to take his work to canvas and wood panel, using carpentry skills his father had taught him in his youth. He has always possessed a DIY attitude, silk-screening his own stickers, shirts and prints, creating zines and building almost every canvas he paints on. Eric approaches his work with a freedom that allows him to continuously develop his style and technique. Always learning, always growing, always striving to be a step above, he aims to create skillfully crafted pieces that provoke thought and imagination.

COME SKATE WITH US.